The Kaiping Diaolou are fortified multi-story watchtowers and residences originally built to protect rural villages. Most were built from the late 19th century to the early 20th century, with a fusion of Chinese and Western architectural styles, by returning immigrants with wealth acquired overseas.

The earliest diaolou were built in the Ming Dynasty as a response to banditry and floods. Building reached a peak during the Warlord Era of the 1920s and 30s. More than three thousand diaolou were built, with approximately 1800 remaining in the Kaiping countryside. Most were abandoned after the Communist Revolution. Some are being maintained by families who now live in other countries.

There are three kinds of diaolou: watchtowers, communal towers built as temporary shelter in an emergency, and residential towers built by rich families as fortified residences. Fortified residences became a way for owners to showcase their wealth, with families and clans competing to build the grandest and tallest towers with modern materials and features at the time. Building was financed by Chinese immigrants returning from the West, Hong Kong and Malaysia, who incorporated Western architectural features, like domes, arches, and Roman columns into the structures. Local builders sometimes worked from postcards sent from abroad. UNESCO designated the Kaiping Diaolou and Villages a World Heritage Site in 2007.

Liyuan Garden or Li Garden was our second stop on a day trip to Kaiping from Guangzhou. We also visited Zilicun, Majianglong, and Jinjiangli village.

Liyuan Garden is not a designated UNESCO World Heritage Site, but is a great example of the grand diaolou residences built by rich families. 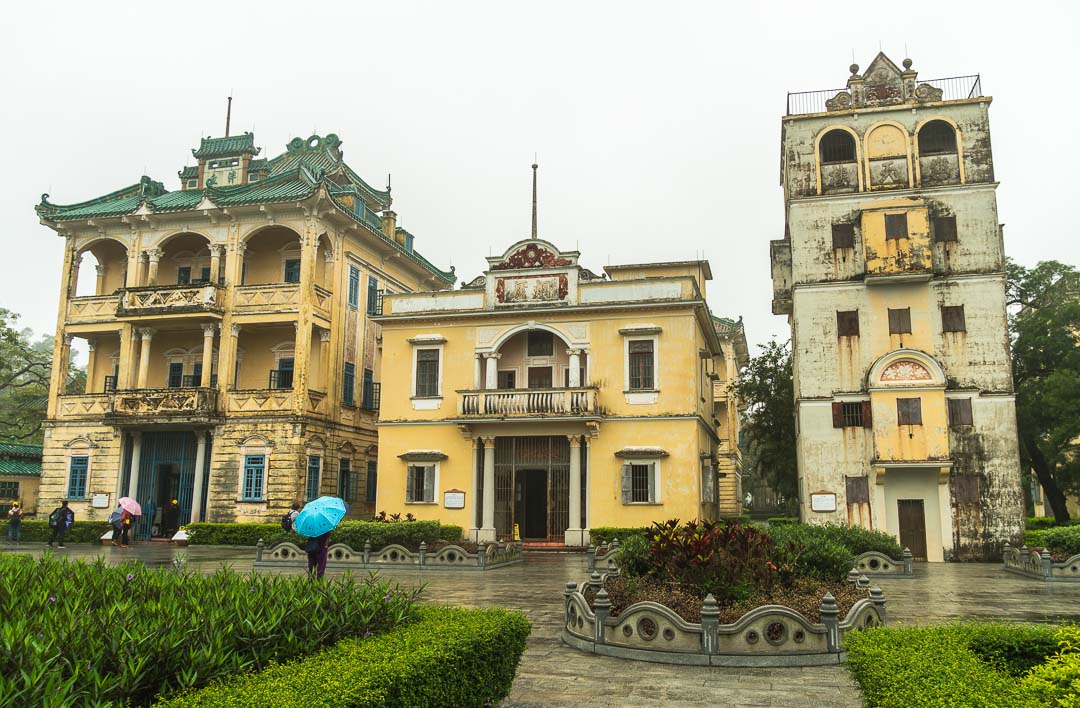 Liyuan Garden was built by wealthy Chinese immigrant Xie Weili, who had four wives and more than 20 children. It took ten years to build and was completed in 1936. The compound is split into three zones: the Villas Zone, Grand Garden, and Little Garden. The zones are divided by three canals. 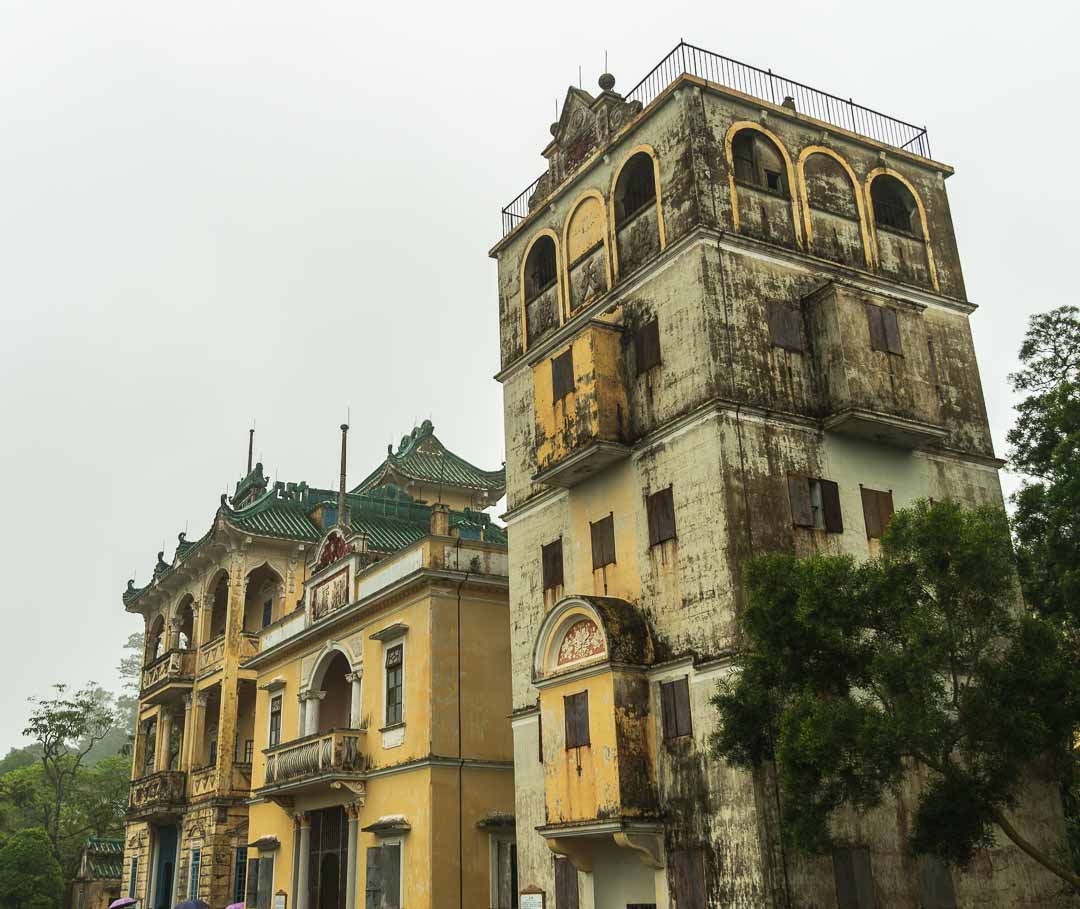 With 30 inch thick walls, iron windows and doors, Letian Lou (on the right) is a traditional diaolou that was built in 1911. It sits between three of the villas on the first row and was considered the security center of the Xie family. 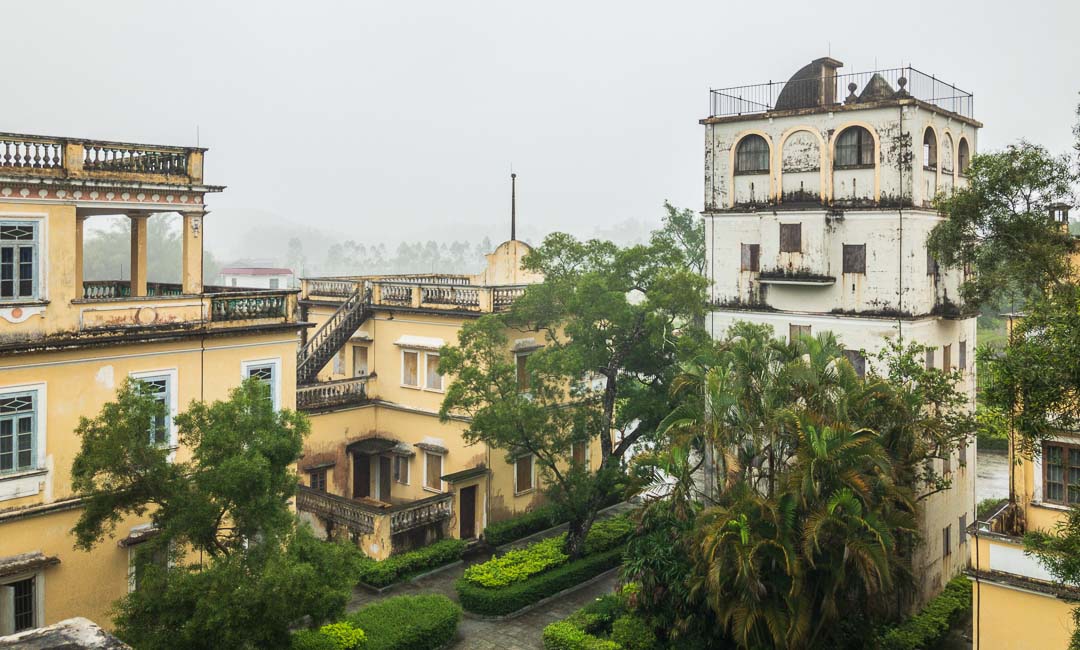 The six fortified villas that surround Letian Lou resemble French villas that are painted yellow and topped with ornate green tiled Chinese roofs. Panli Lou and Panwen Lou, the two most prominent villas, share the same basic footprint and were built in 1926. 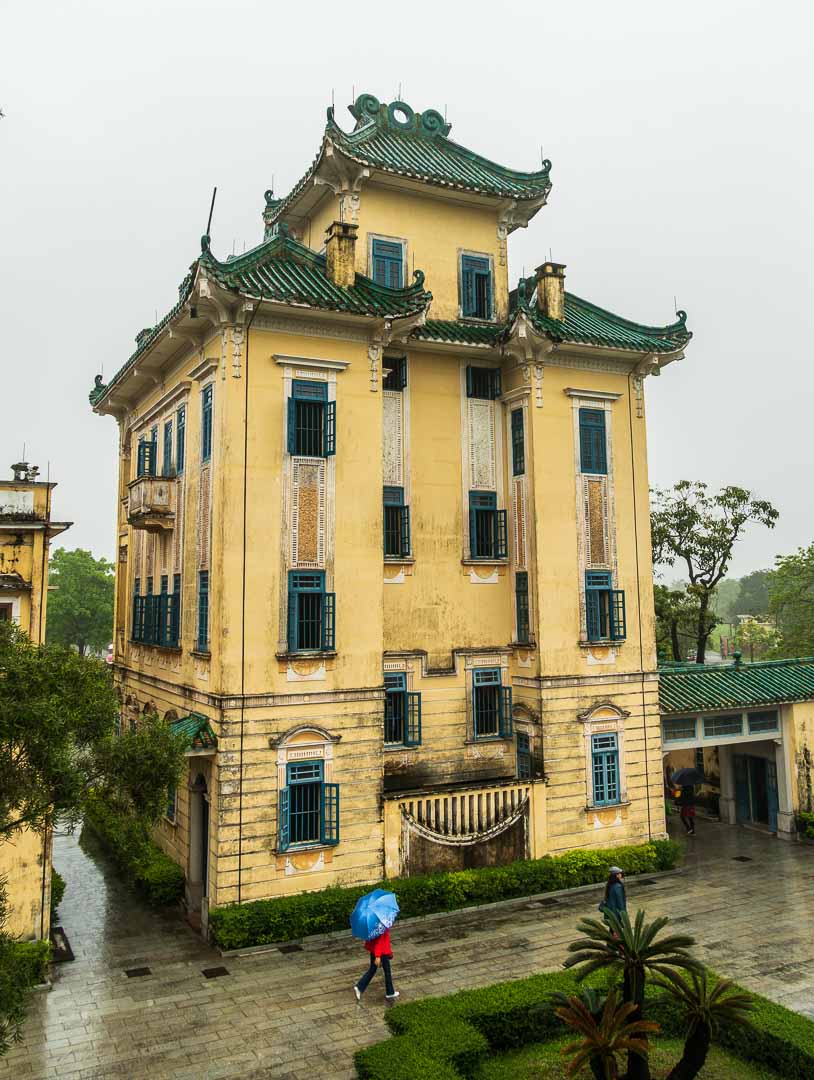 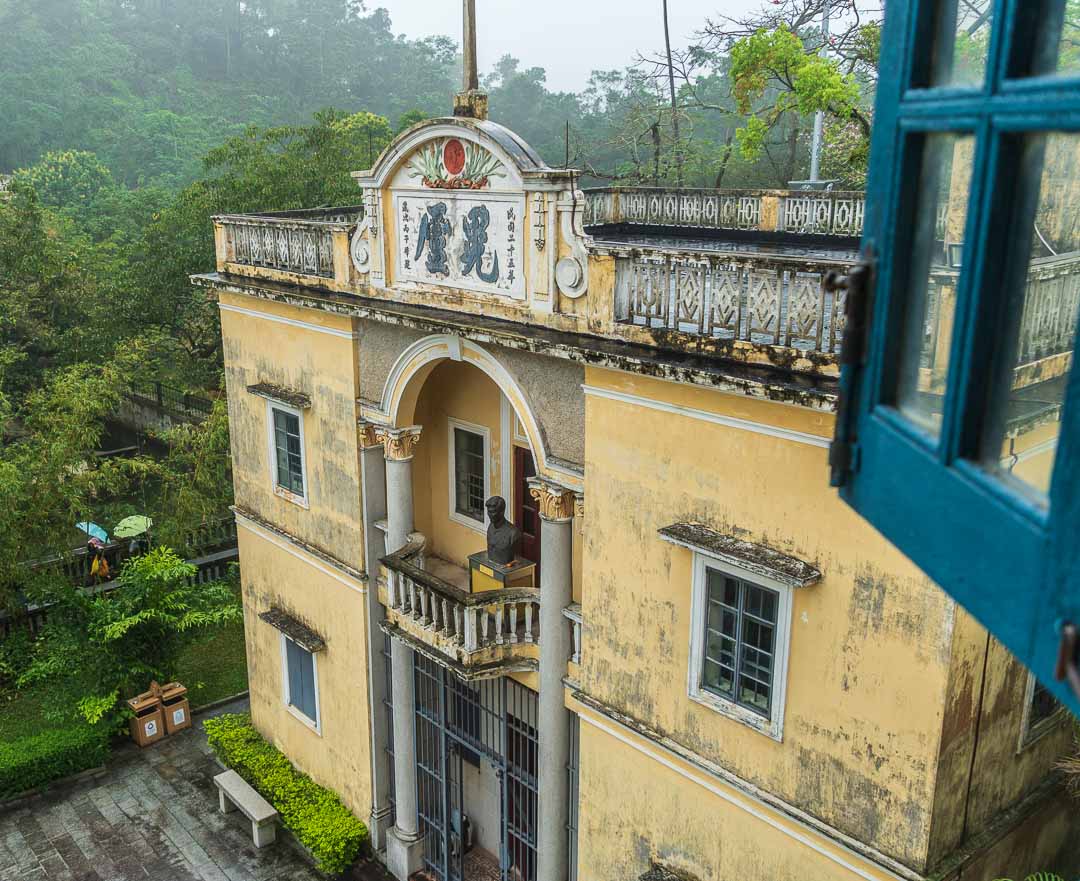 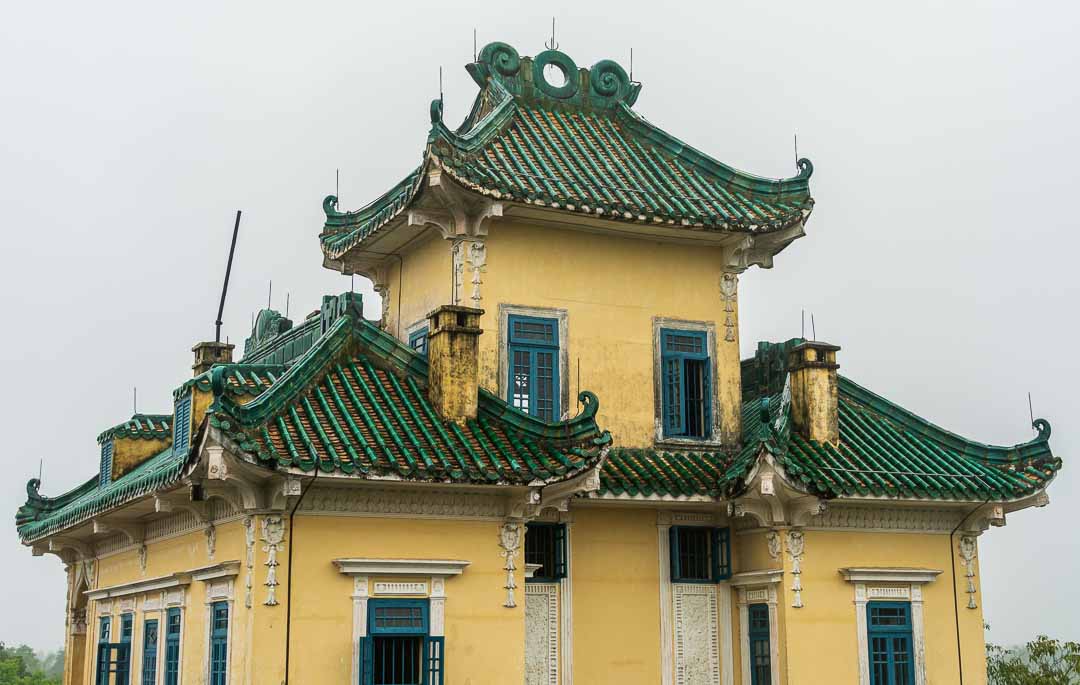 We had a look inside Panwen Lou, which was the residence of Weiwen Xie, older brother of Weili Xie. There was an eclectic mix of architectural styles built with imported materials. The foyer had dark wood panels and doors, ionic column reliefs framing the staircase, and what looked to be Moroccan tiled floors. 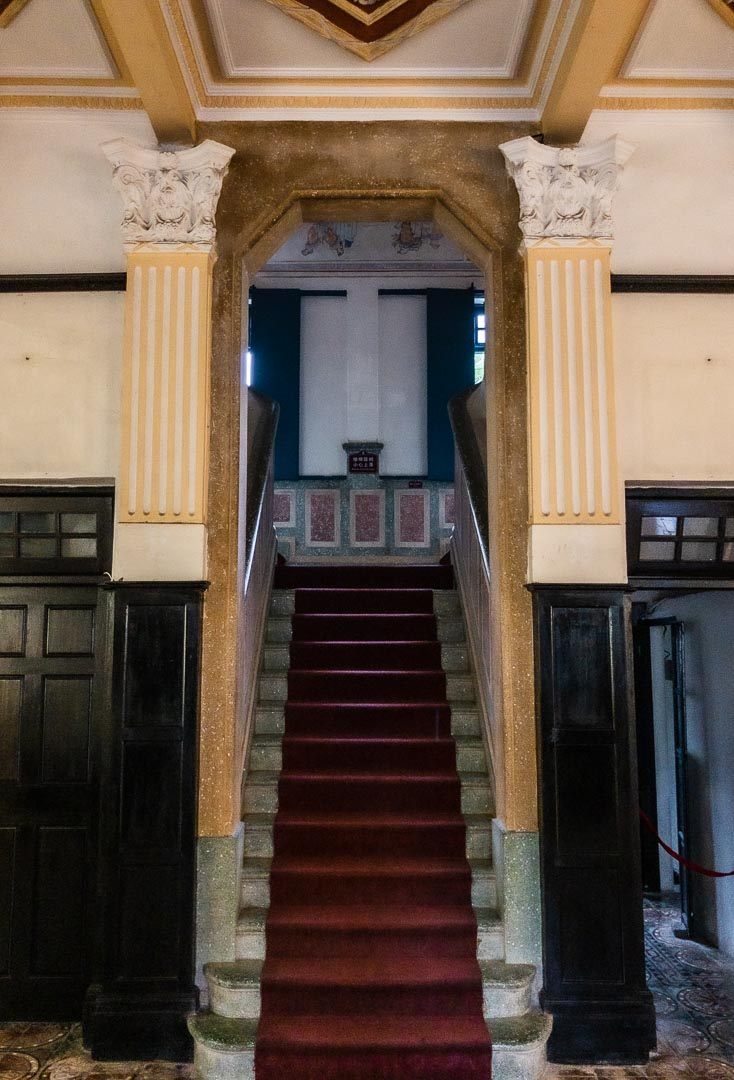 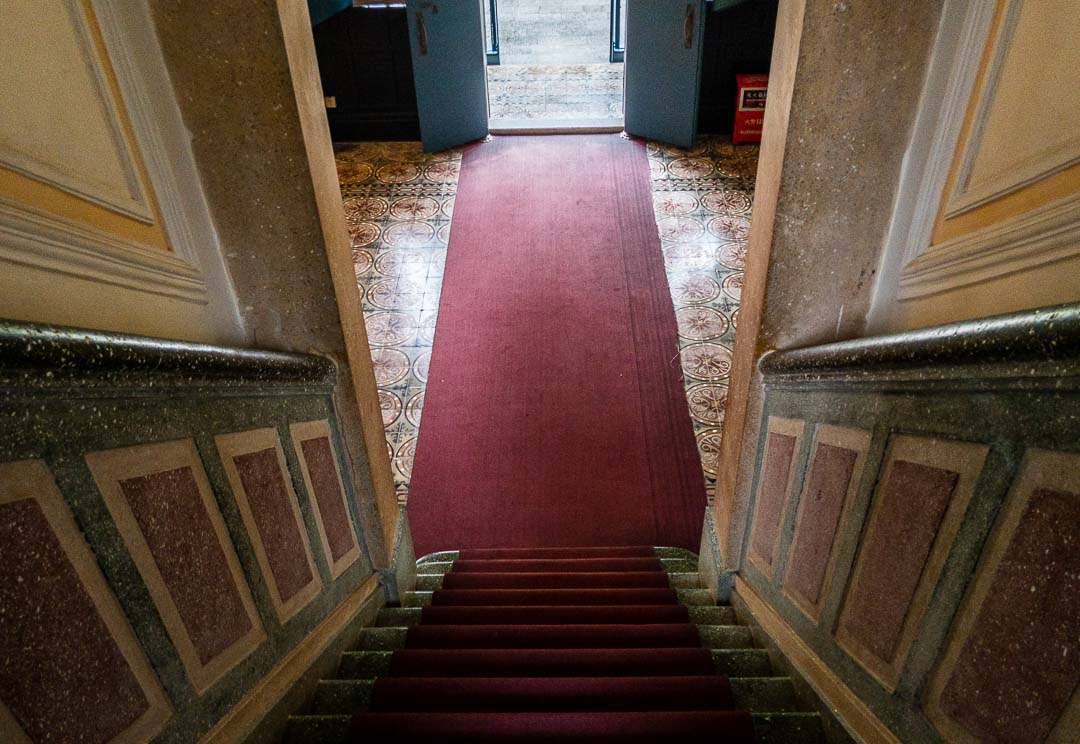 Terrazzo was used extensively in place of marble and wood on the staircases. Many of the stairs also had carpet. The rooms were filled with imported furniture. 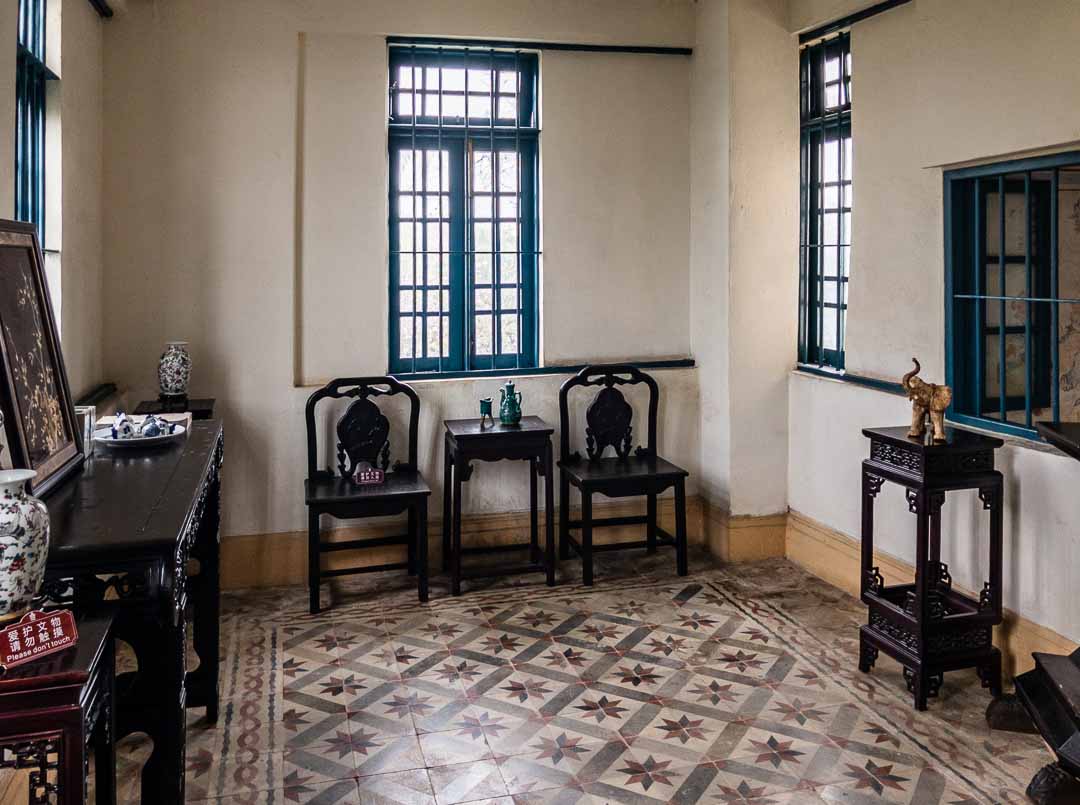 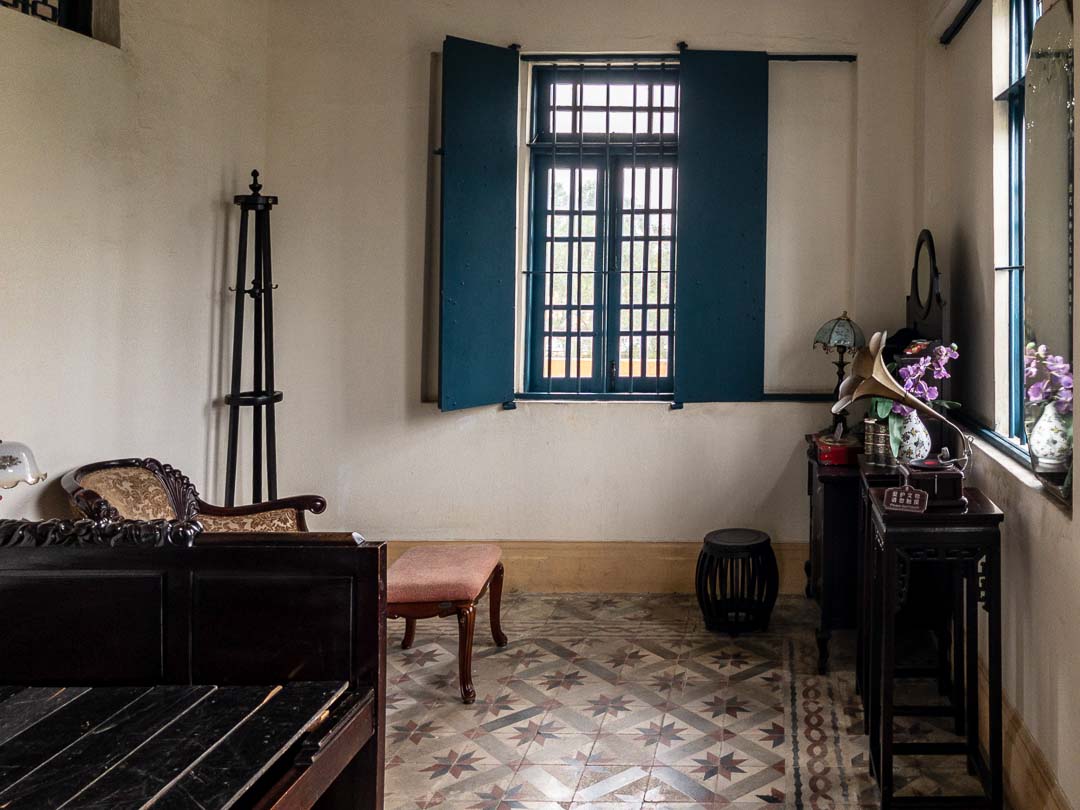 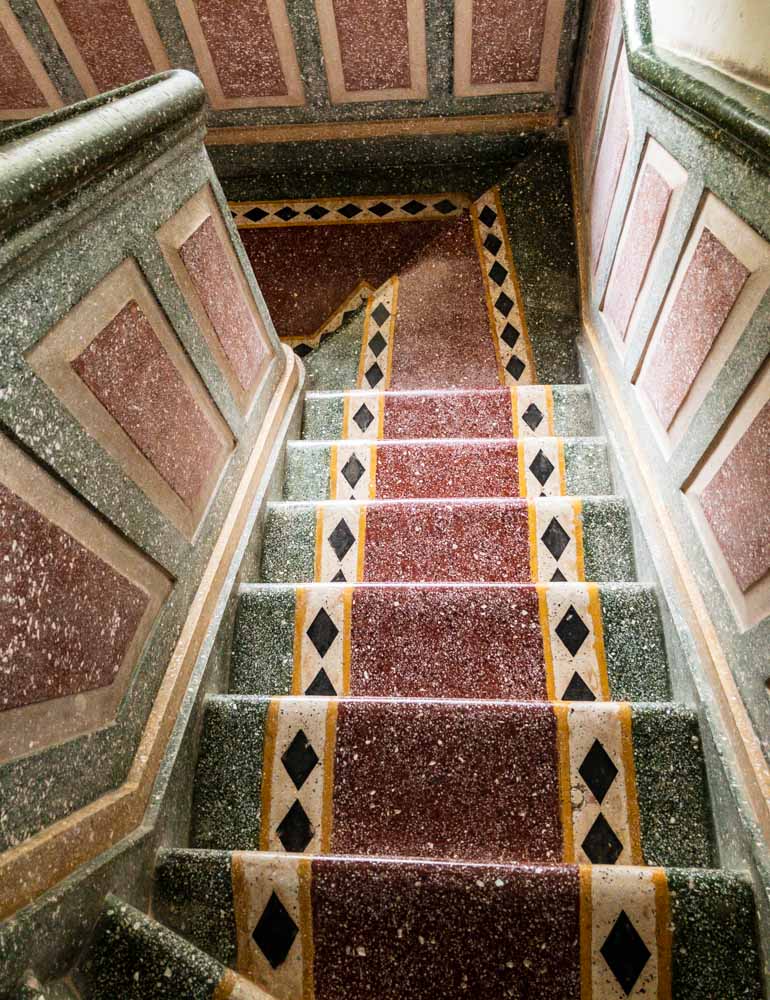 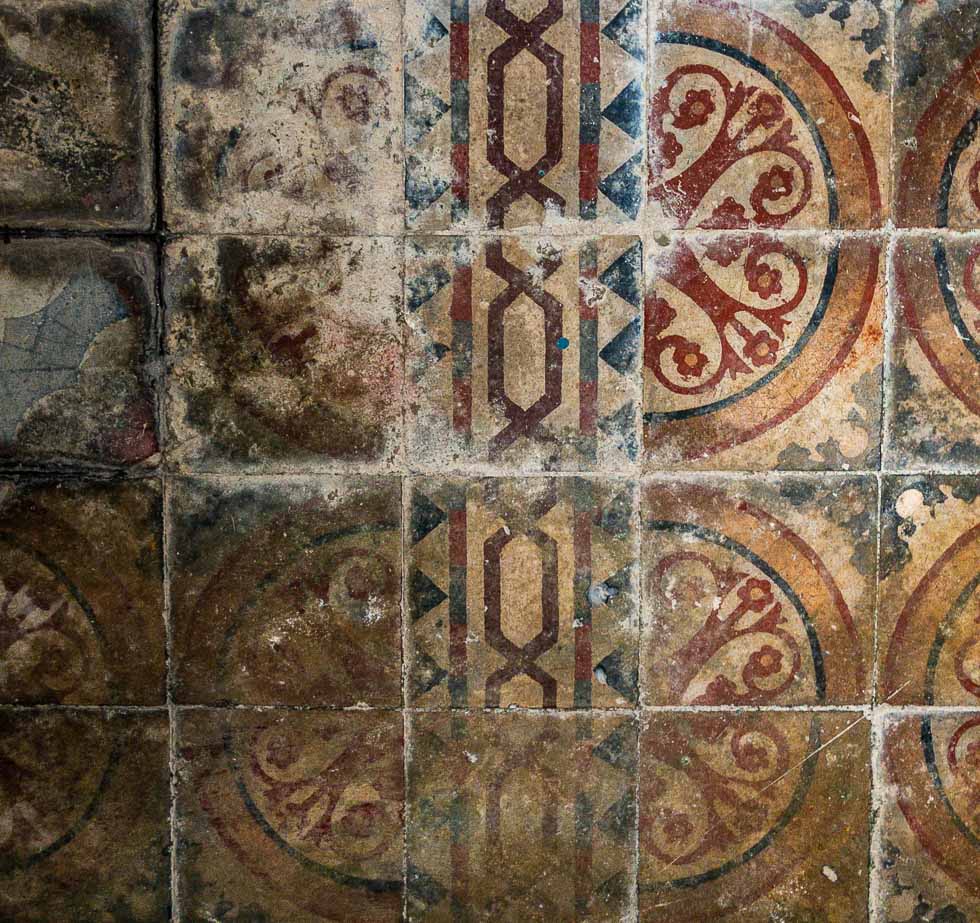 Panwen Lou and the other villas were also equipped with modern conveniences that we take for granted like indoor plumbing. This included flushing toilets. Most Chinese at the time had outdoor toilets. Even now there are many people in China still live without toilets or indoor plumbing. 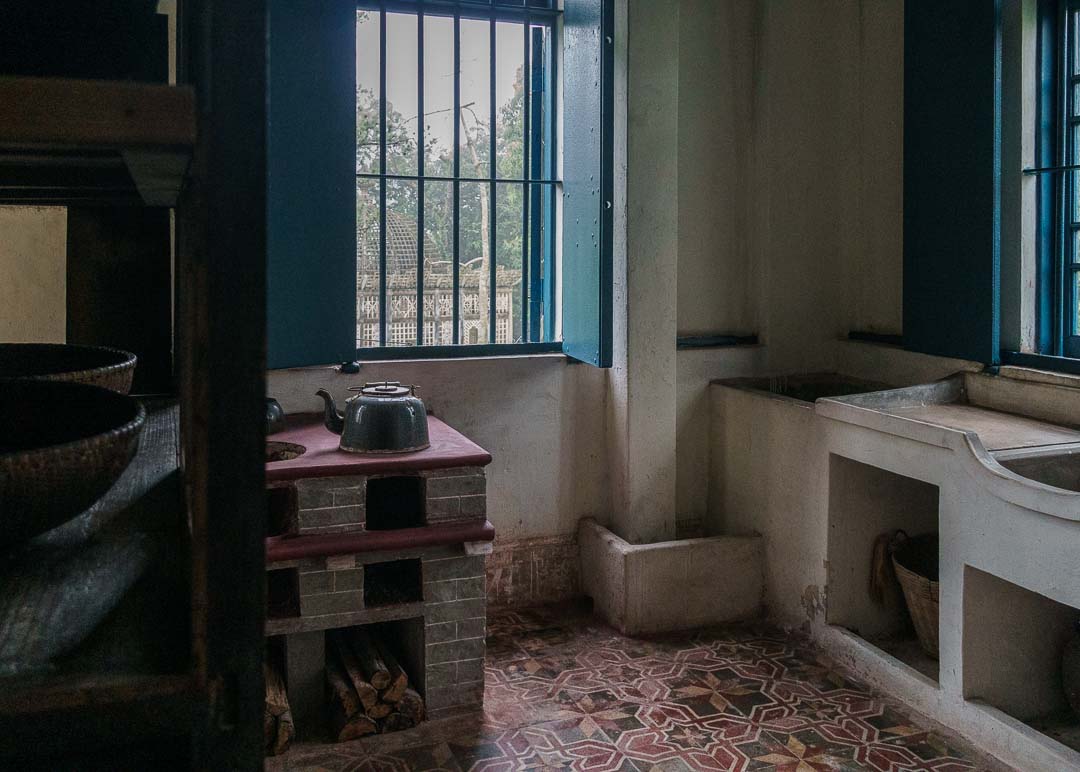 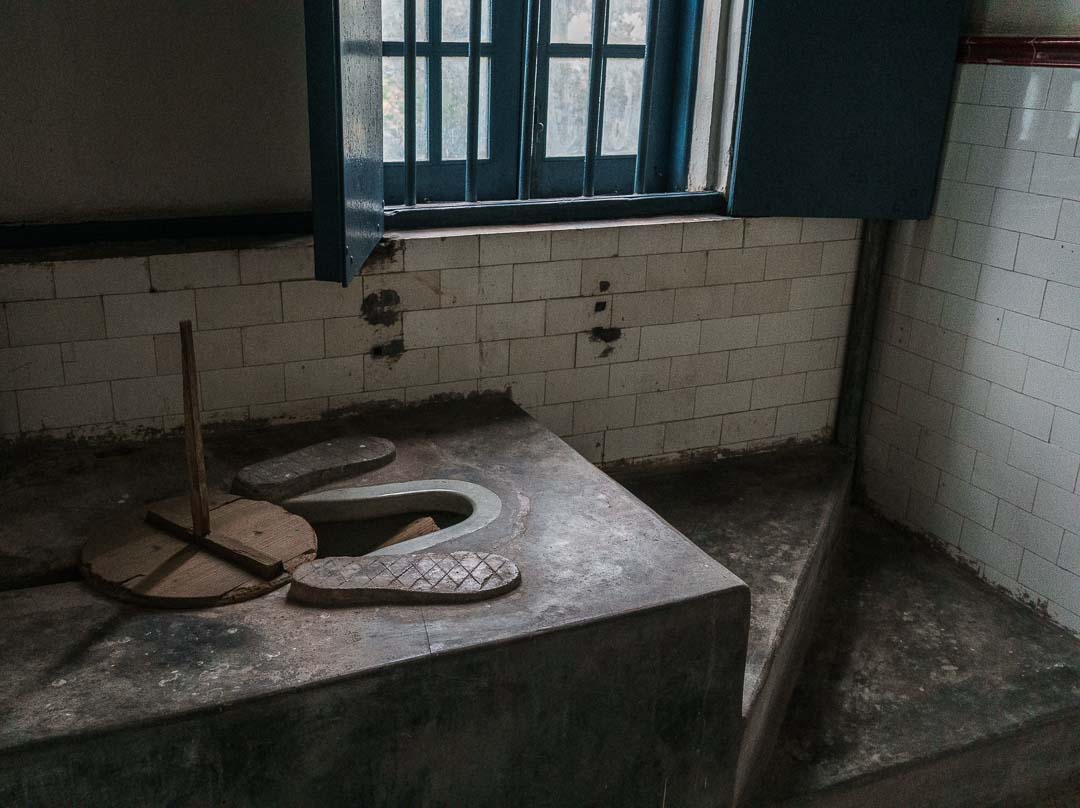 We were in a bit of a hurry, because it was getting late, and we still had to hit Majianglong, and Jinjiangli village. We didn’t have a lot of time to really explore the gardens. 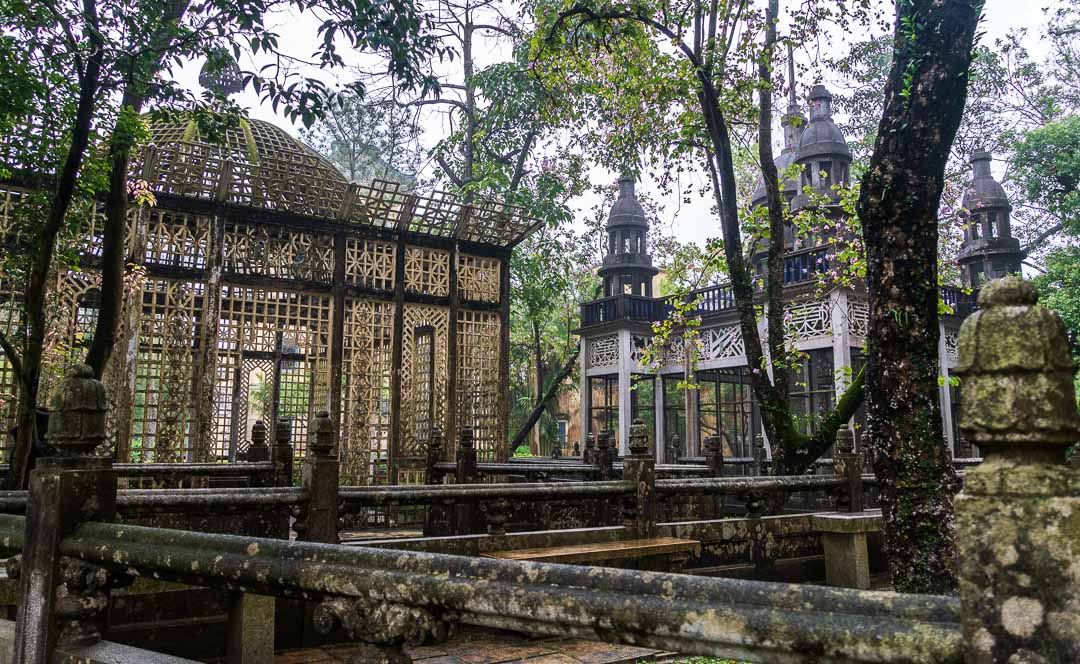 The Bird’s Nest and Hua Teng (Flower Vine) Pavilion are two of the structures in the Grand Garden area behind the villas. The roof of the Hua Teng Pavilion is shaped like the crown of the Queen of England, the Bird’s Nest is an aviary. 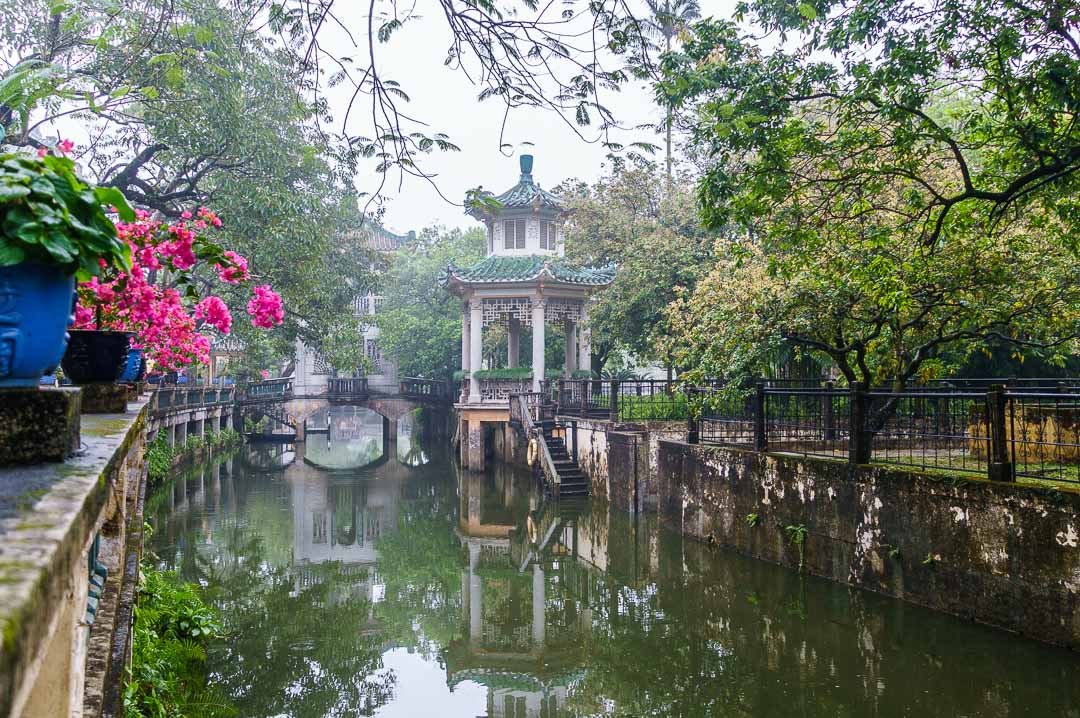 The Little Garden Zone is separated by a grand canal, connected to the rest of the garden by a series of bridges. The hexagonal Yicui Pavilion is one of several pavilions located around the garden. 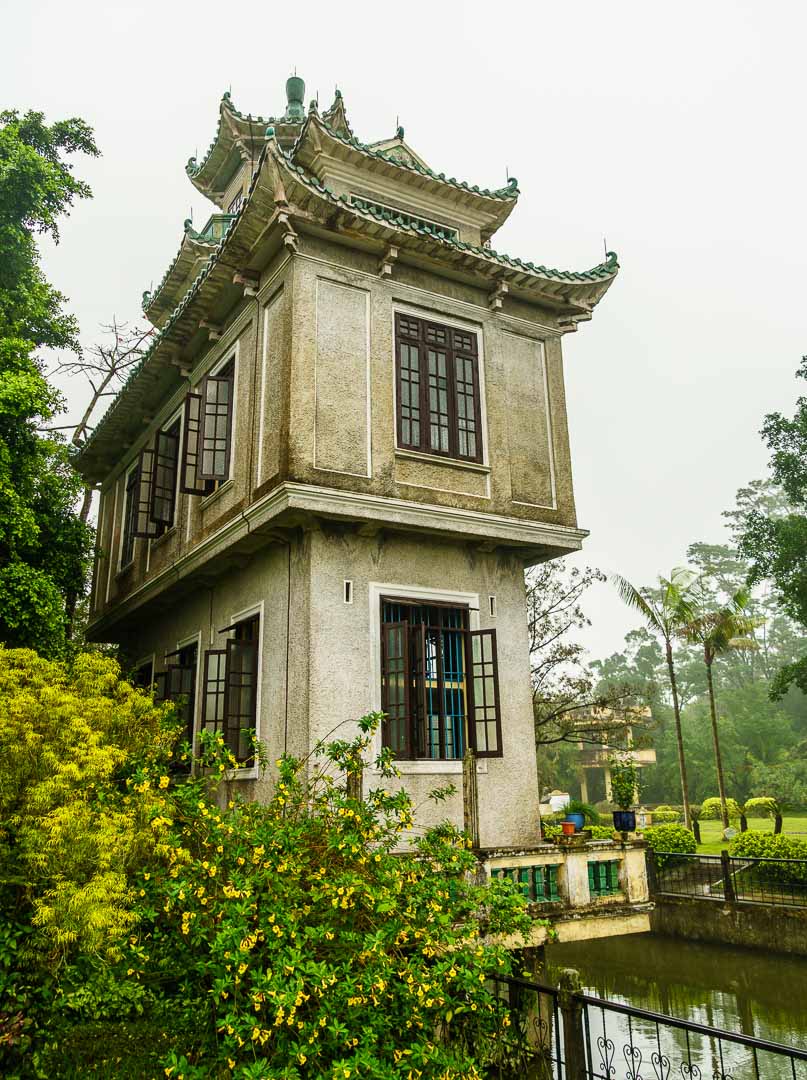 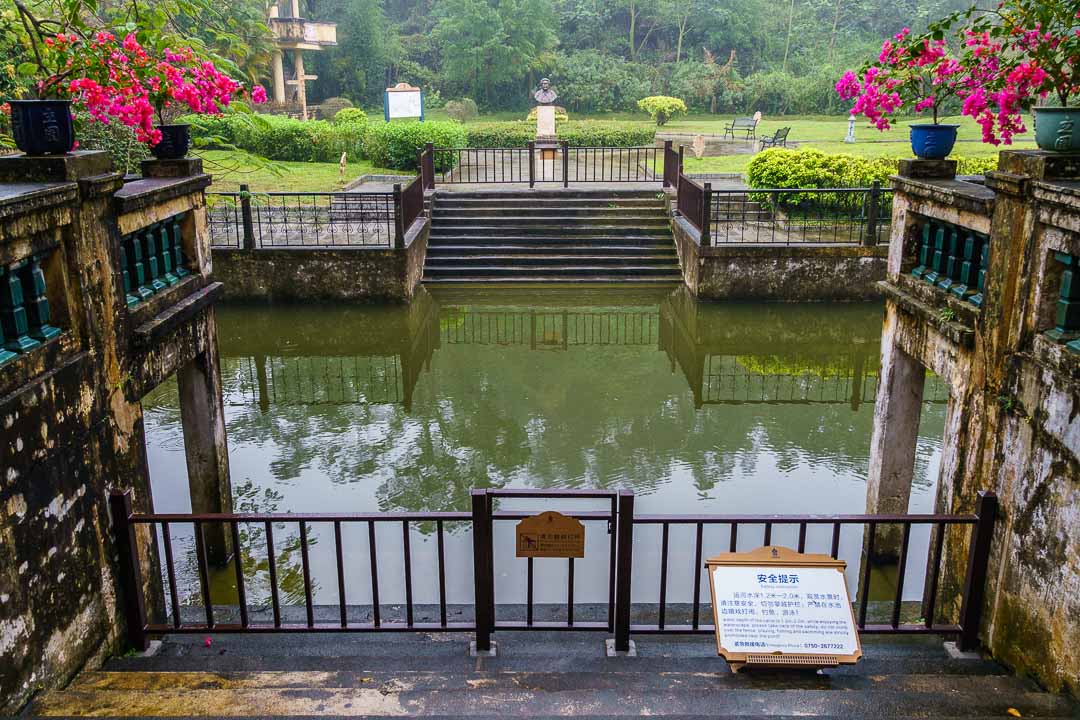 The The Yupei Villa (above) overlooks the main canal and the Little Garden, which is connected to the Villa Zone and the Grand Garden by a series of bridges over the canals.

By the time we made it back to the entrance, it was well past noon. We looked around a little shopping area, and had a quick lunch of dumplings before heading off to find our driver.

Some of the information in this post was referenced from Wikipedia, CNN Travel, Travel China Guide and other sources.

← The Watchtowers of Kaiping: Zili Village 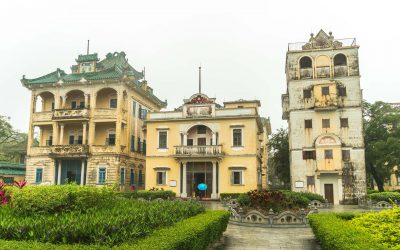 The Kaiping Diaolou are fortified multi-story watchtowers and residences originally built to protect rural villages. Most were built from the late 19th century to the early 20th century, with a fusion of Chinese and Western architectural styles, by returning... 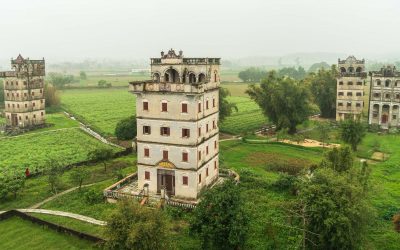 The Kaiping Diaolou are fortified multi-story watchtowers built to protect rural villages from ethnic warfare, bandits, and warlords. Most were built from the late 19th century to the early 20th century with a fusion of Chinese and Western architectural styles by...

Hutongs are traditional neighborhoods in Beijing and other northern Chinese cities. These neighborhoods are created by a series of alleys or narrow streets (called Hutong) that are formed by connecting traditional courtyard residences, called siheyuan.Beijing’s...