Dōngyuè Temple is a 14th century Taoist temple in Beijing’s Central Business District. From the outside this hidden gem looks like most other small temples in China, but passing through its gates takes one on a tour of the Taoist afterlife. 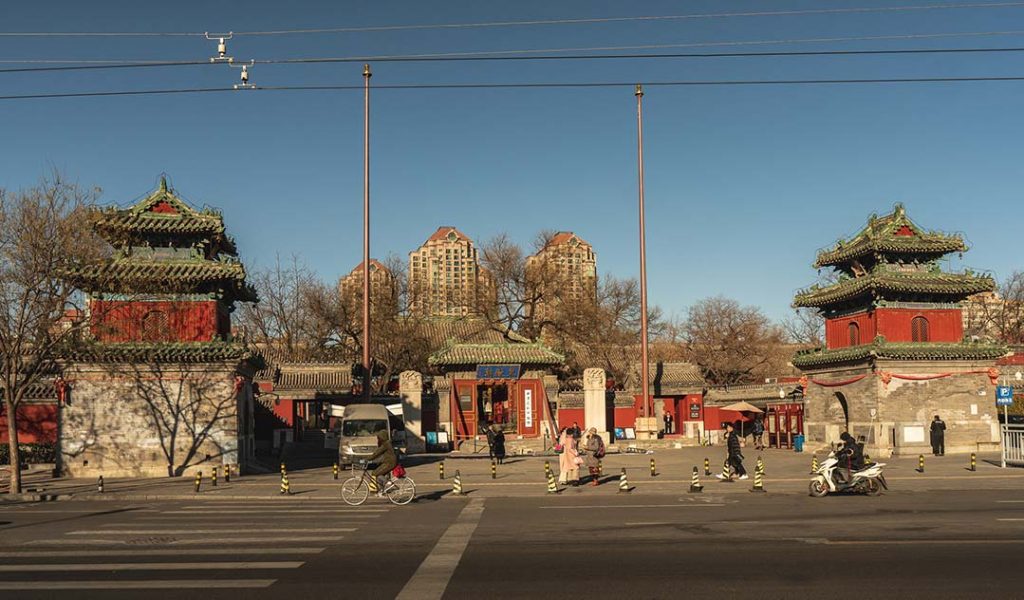 Dōngyuè Temple is one of the largest Taoist temples in northern China. It is dedicated to the God of the Eastern Peak, Mount Tai, the holiest of the Five Sacred Mountains of China.

The main halls and the main gate were completed in1322. The temple was expanded and rebuilt twice during the Qing dynasty. 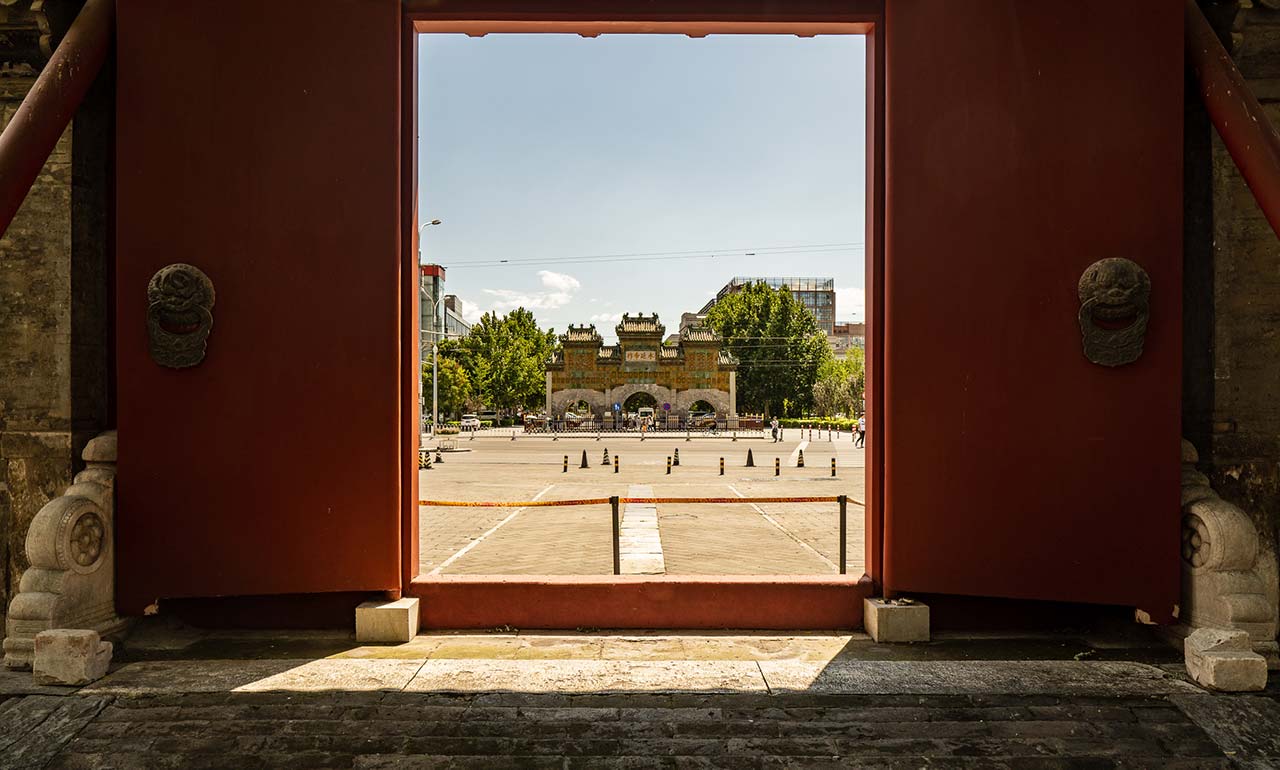 The memorial archway opposite the temple, across Chaowai Street, seen through the main gate. It was built in 1602. Another gate between the temple and the archway was dismantled in 1988 when Chaowai street was widened. 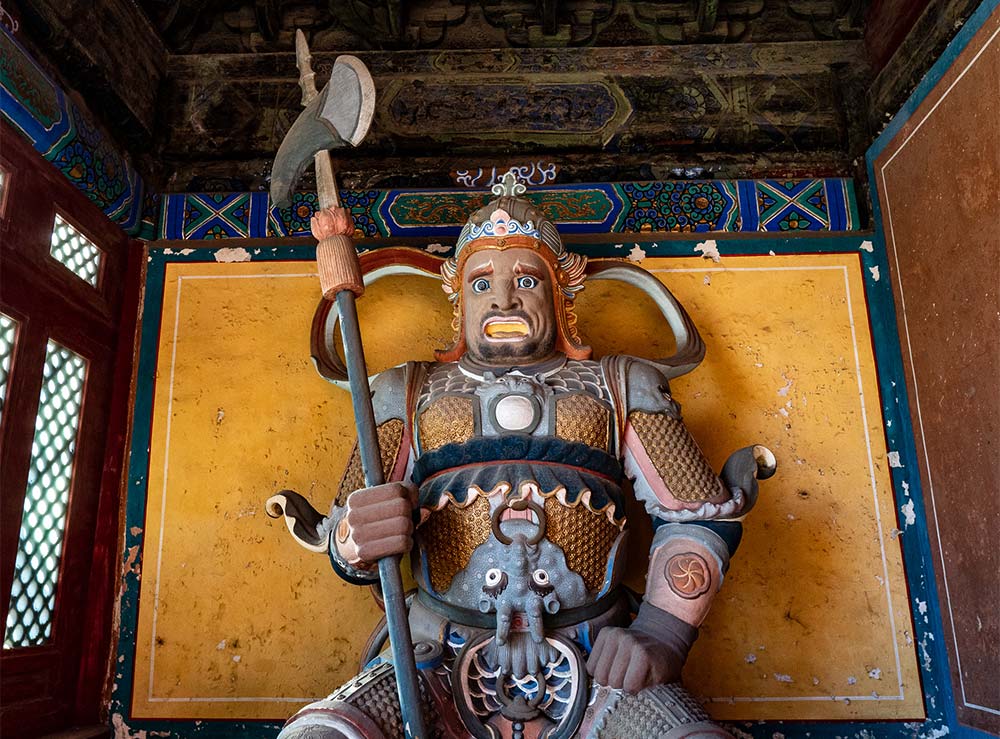 Guardian deities greet you when entering the main gate, called the Zhandai (or Dragon Tiger) Gate. Ten imperial guards of Mt. Tai sit in a side room on the other side.

Monks walking the raised pathway named “Happiness Road” that extends through the courtyard.

There are two pavilions on both sides of the path, with memorial stele for Emperor Kangxi and Emperor Qianlong of Qing Dynasty. 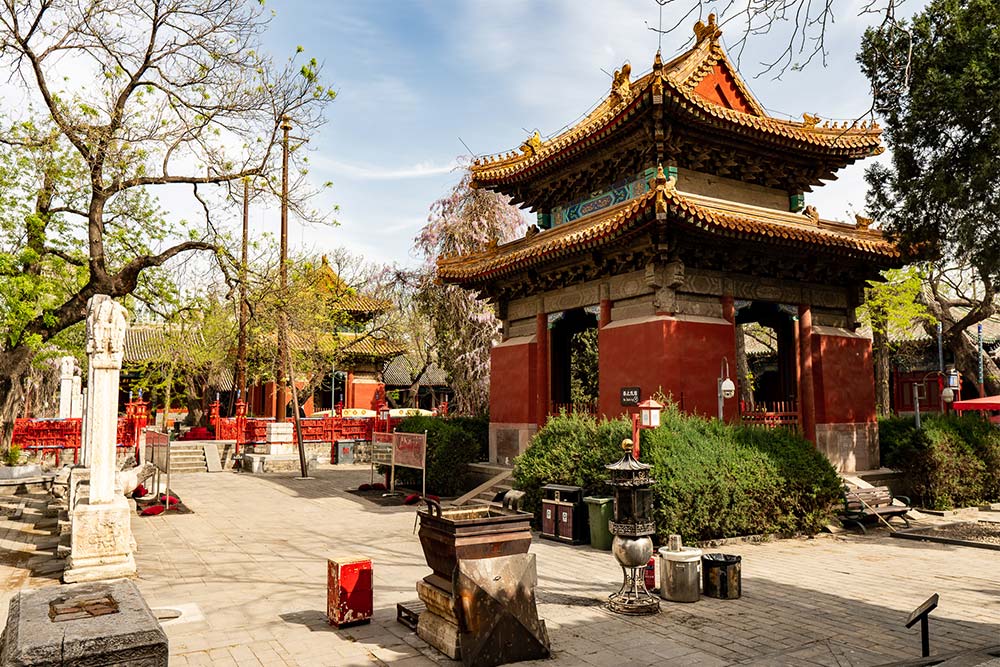 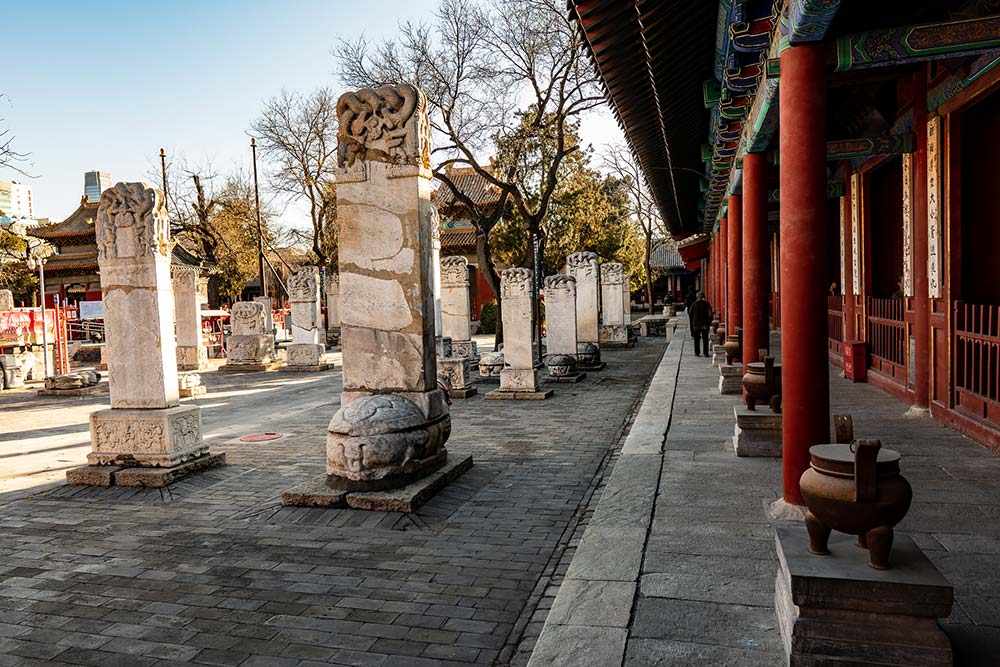 90 stele with Chinese calligraphy from the Yuan, Ming and Qing dynasties are distributed between both sides of Happiness Road. Many sit on the backs of stone turtles gods. There were originally 140. 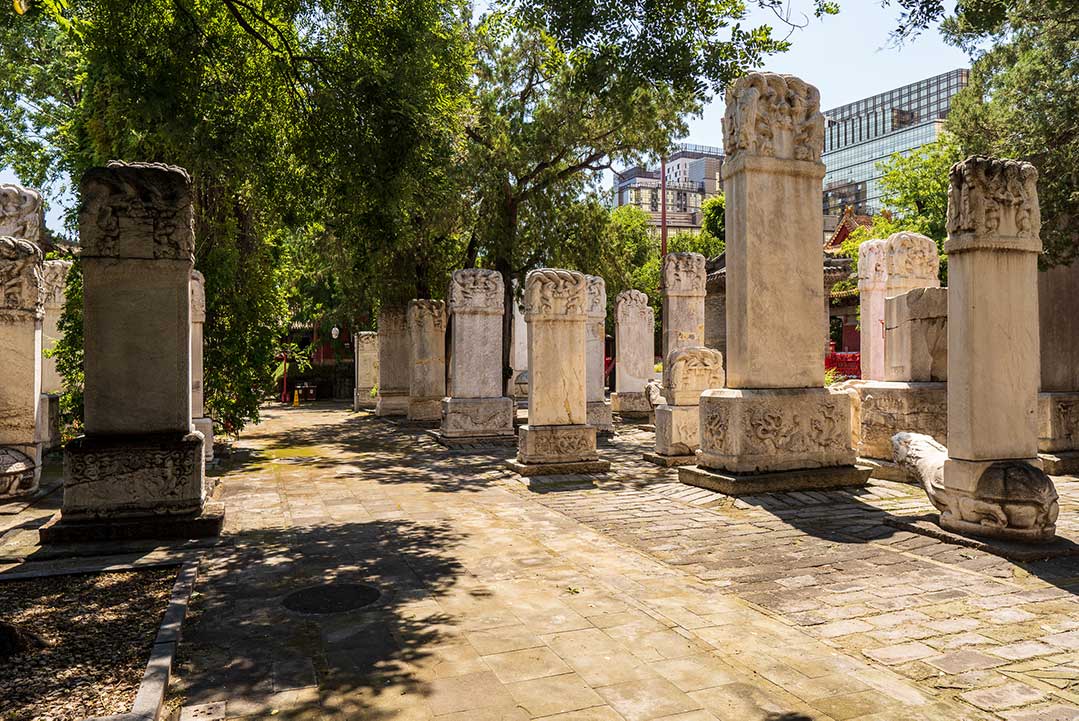 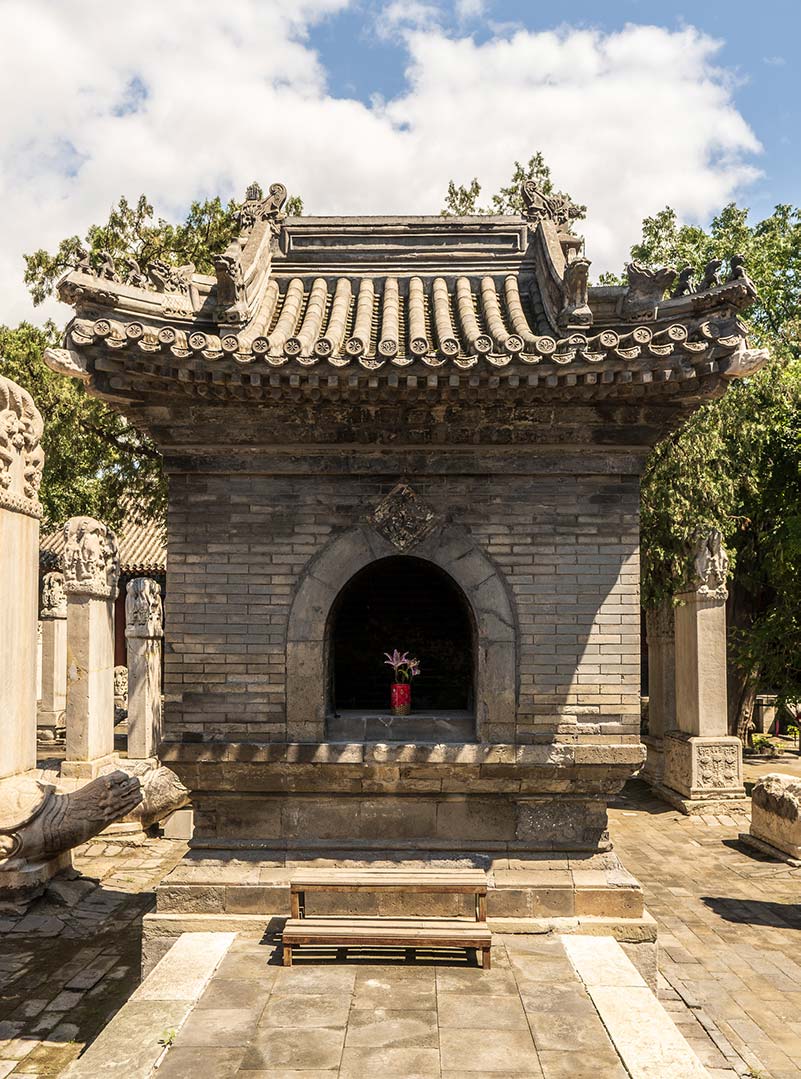 Happiness Road ends at Daiyuedian Hall, also known as Mount Tai Palace. Two little towers which hold what appears to be ash, branch off both sides of the path, just before the hall.

I couldn’t get photos inside Daiyuedian Hall, but got several shots in the back rooms known as the living palace called “Yu De”, or Yude Hall. 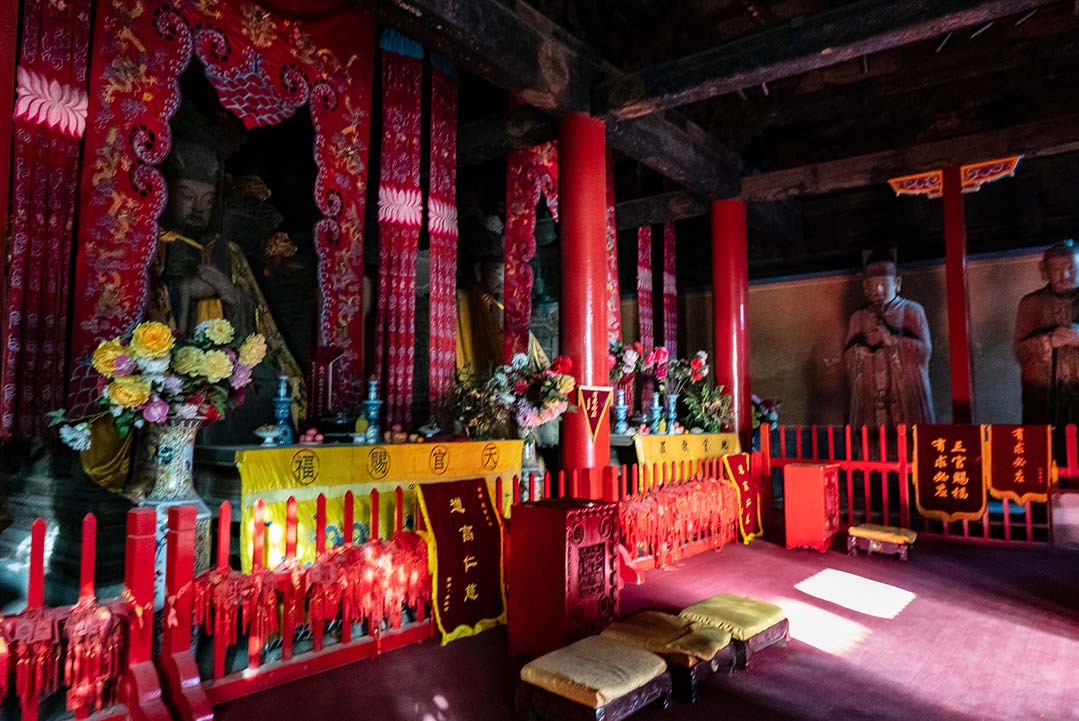 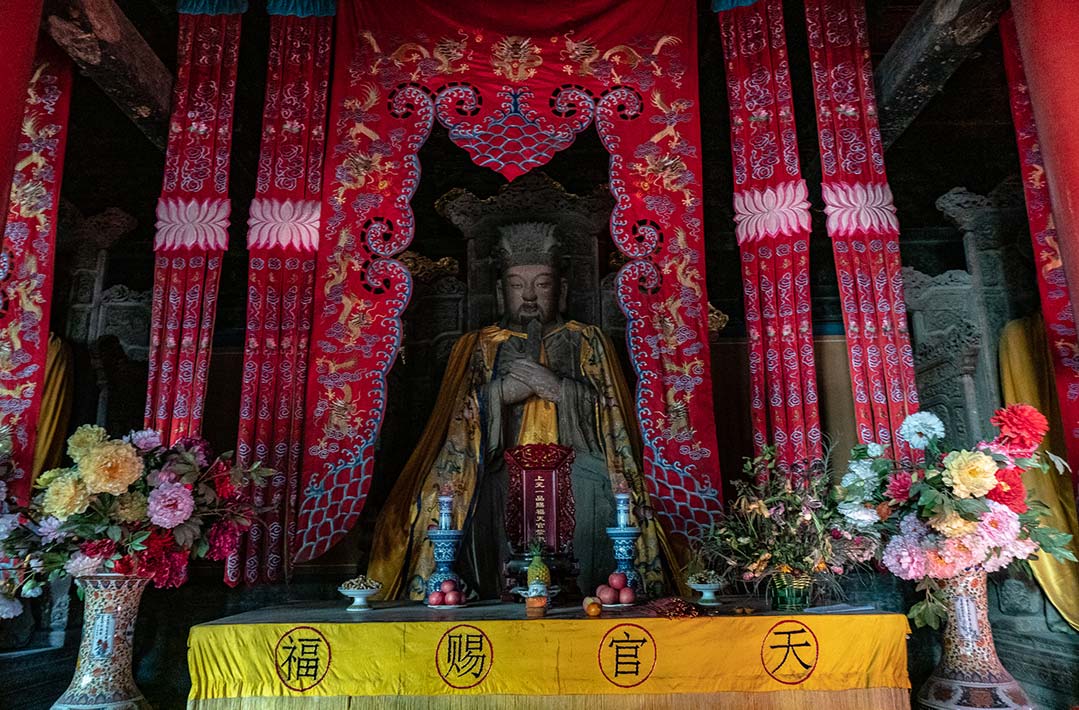 The Hall was originally dedicated to the statues of God and Goddess of Mount Tai, but now displays Jinsi Nanmu wooden sculptures of statues of the gods of heaven, earth, and water and other Taoist deities. 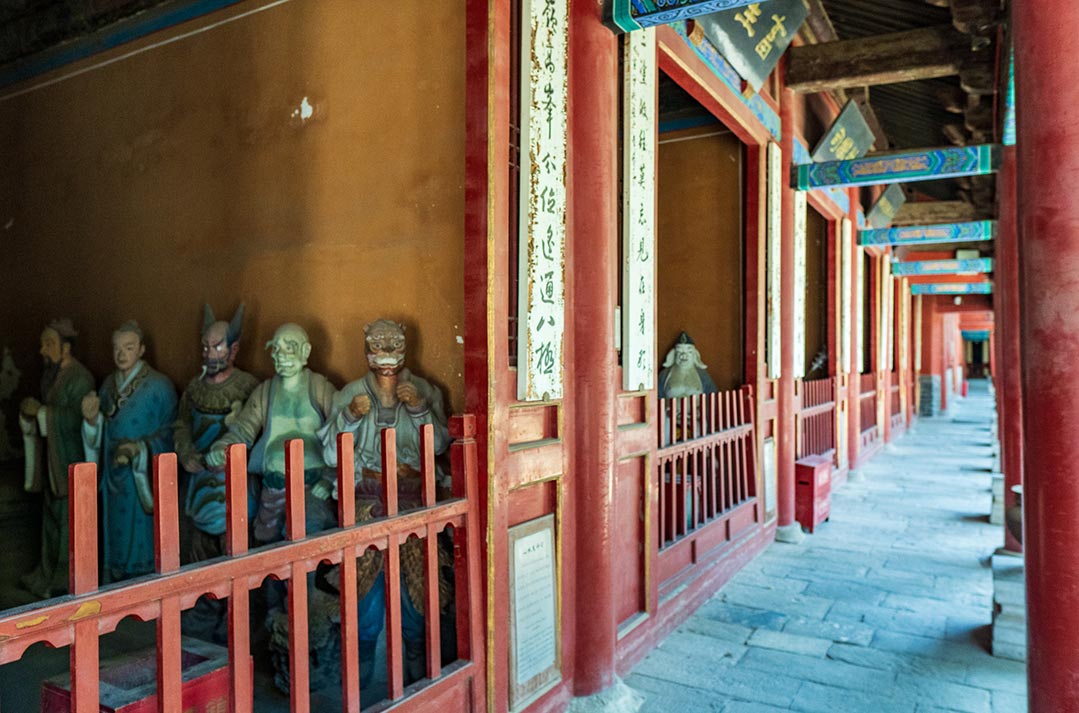 Departments of the Afterlife

What distinguishes Dōngyuè Temple from just about every other temple we’ve seen in China, are the cubicles on the east and west sides of the courtyard with plaster sculptures that represent the 76 departments of the afterlife, or hell, under the jurisdiction of the God of Mt. Tai. Some of my favorite departments are featured below.

Department of Halting Destruction of Living Beings
Not sure I would trust this guy with a knife. 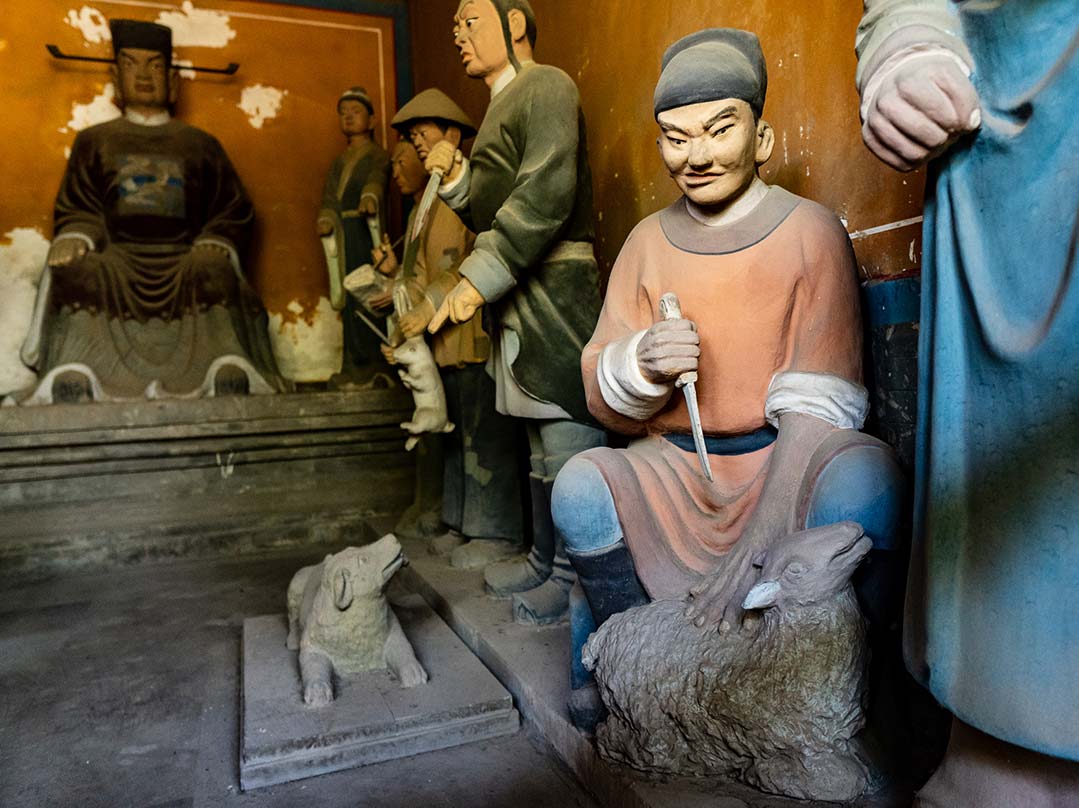 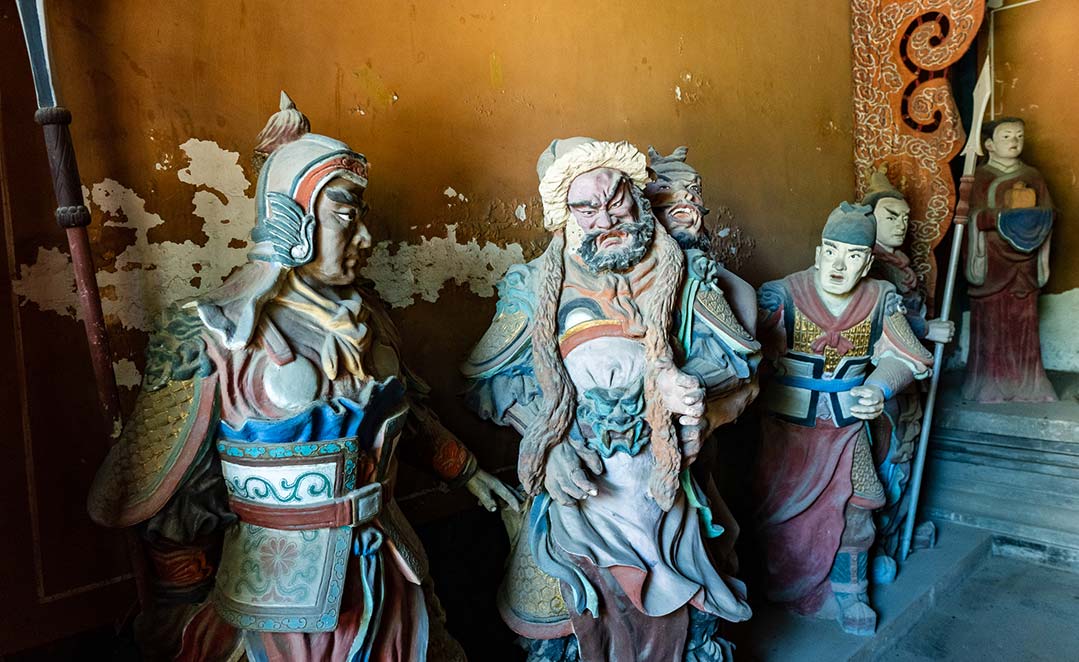 Department of Instant Rewards and Retribution 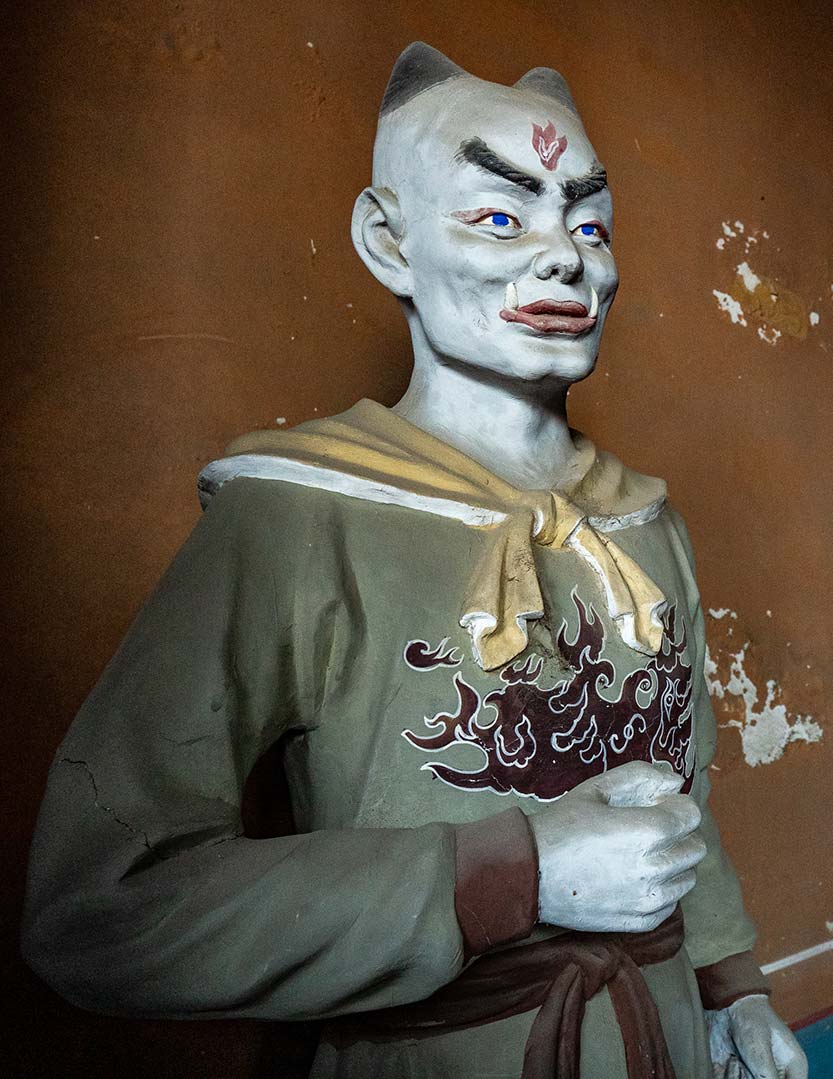 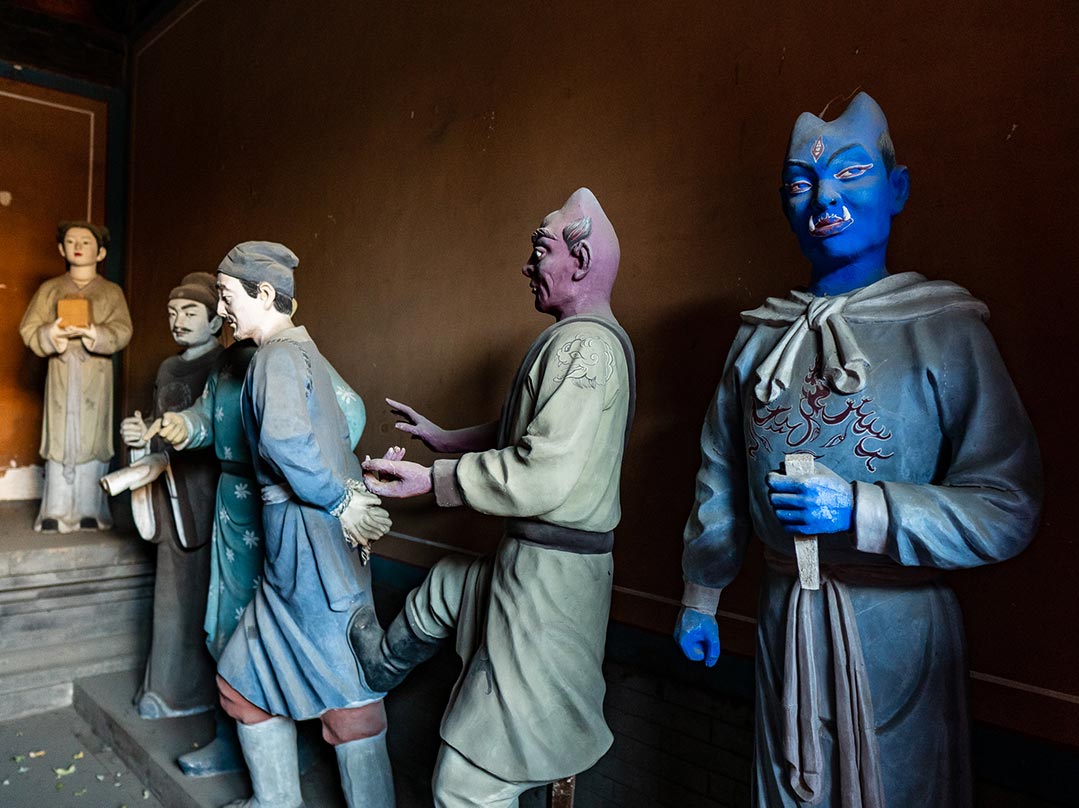 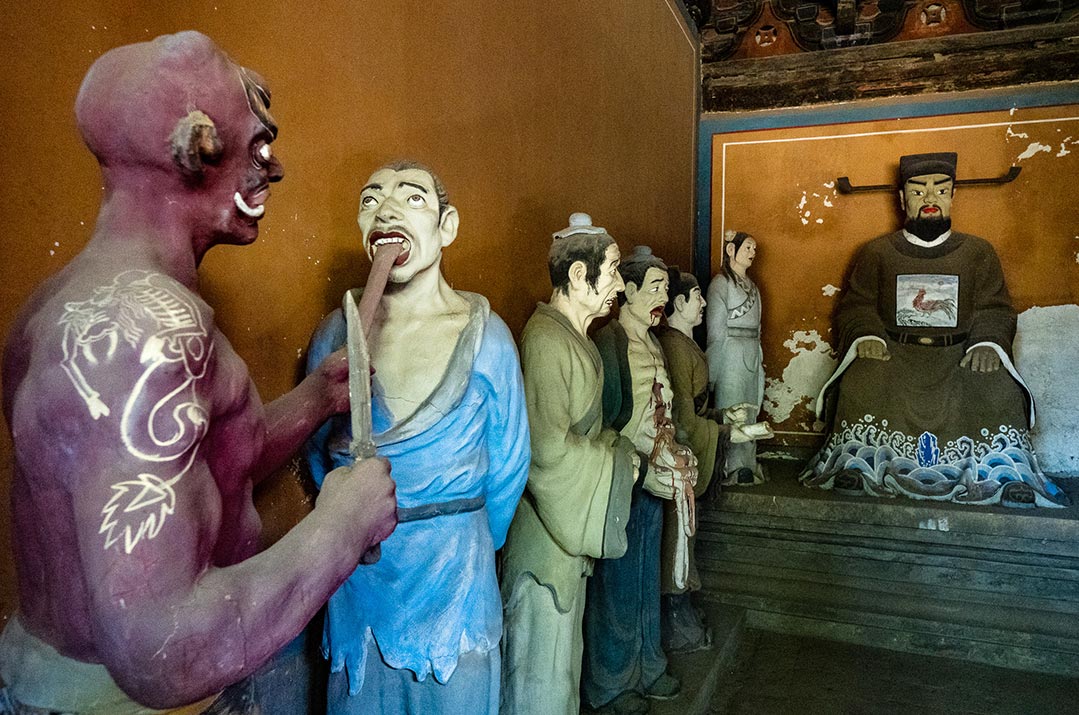 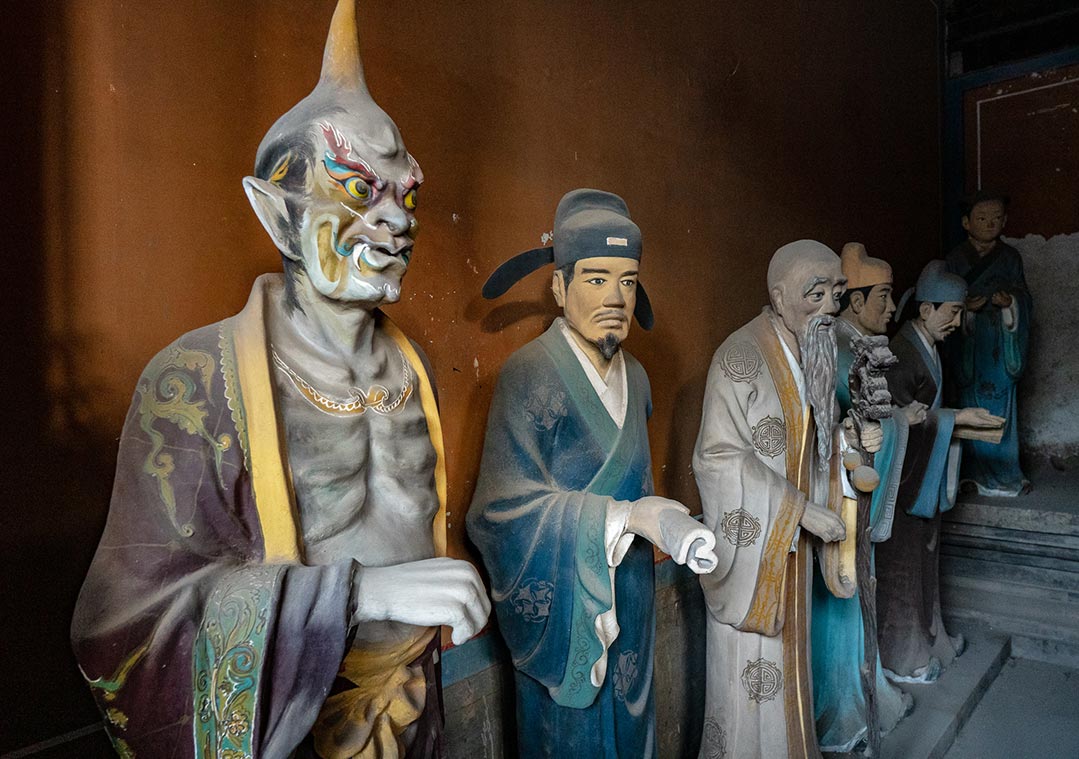 Department for Demons and Monsters

Department of Forest Ghosts and Spirits
(The cover image is from the same department.) 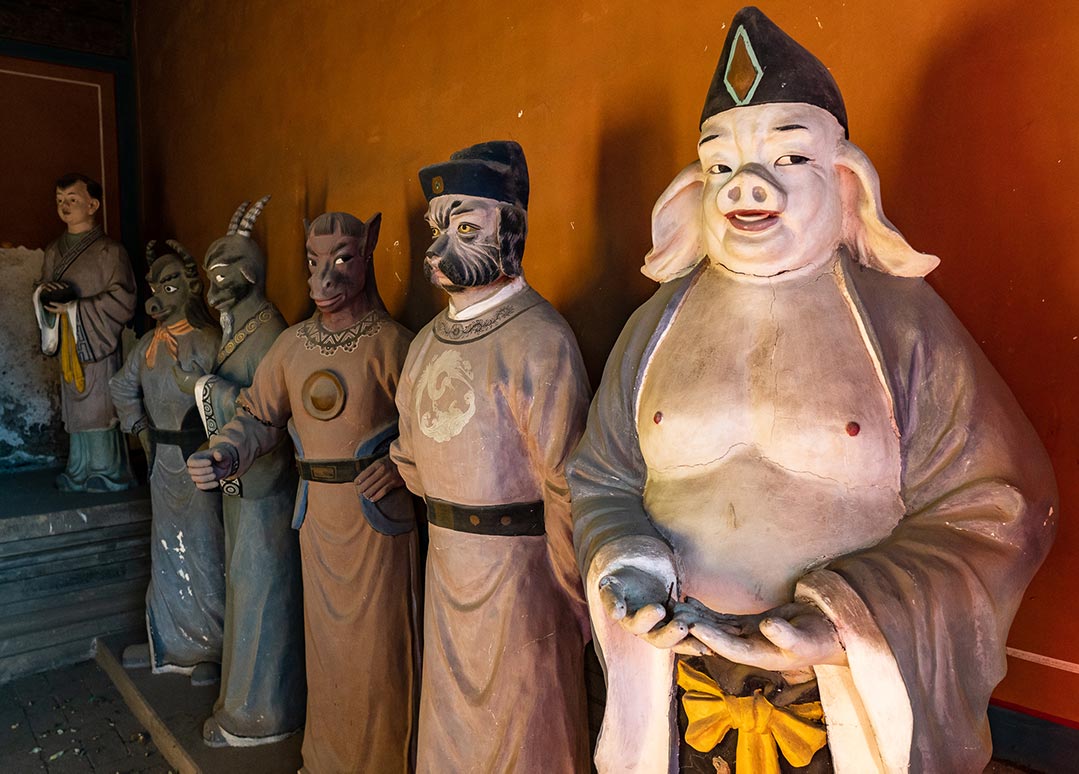 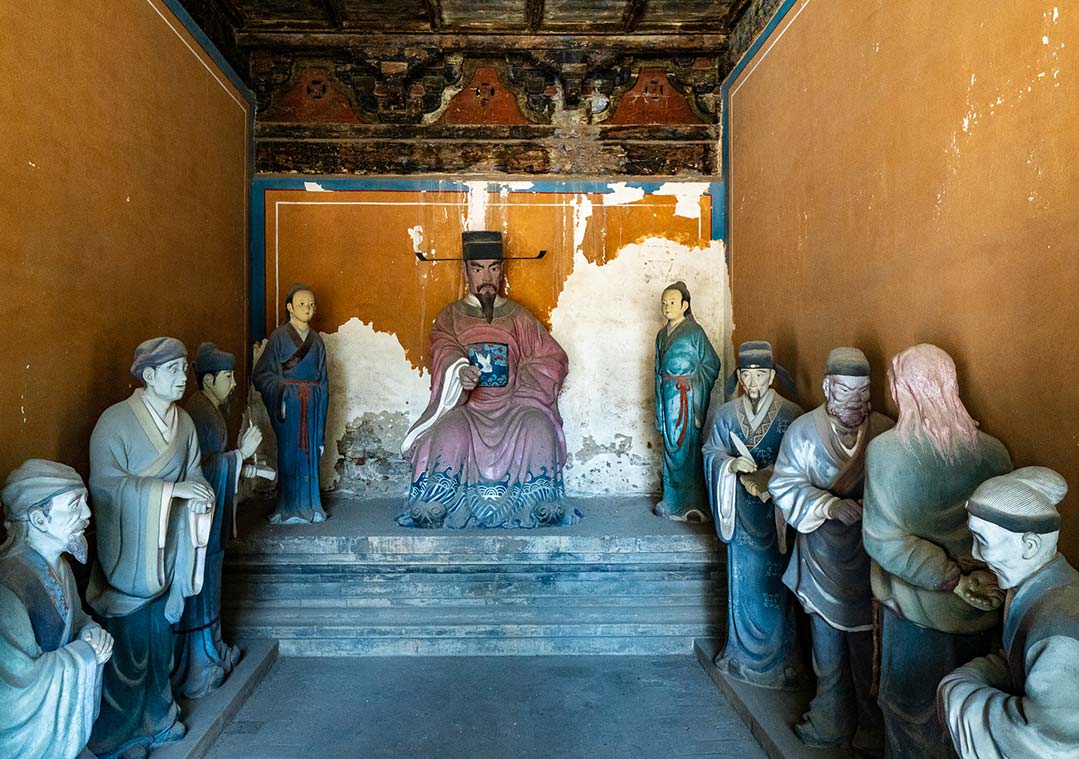 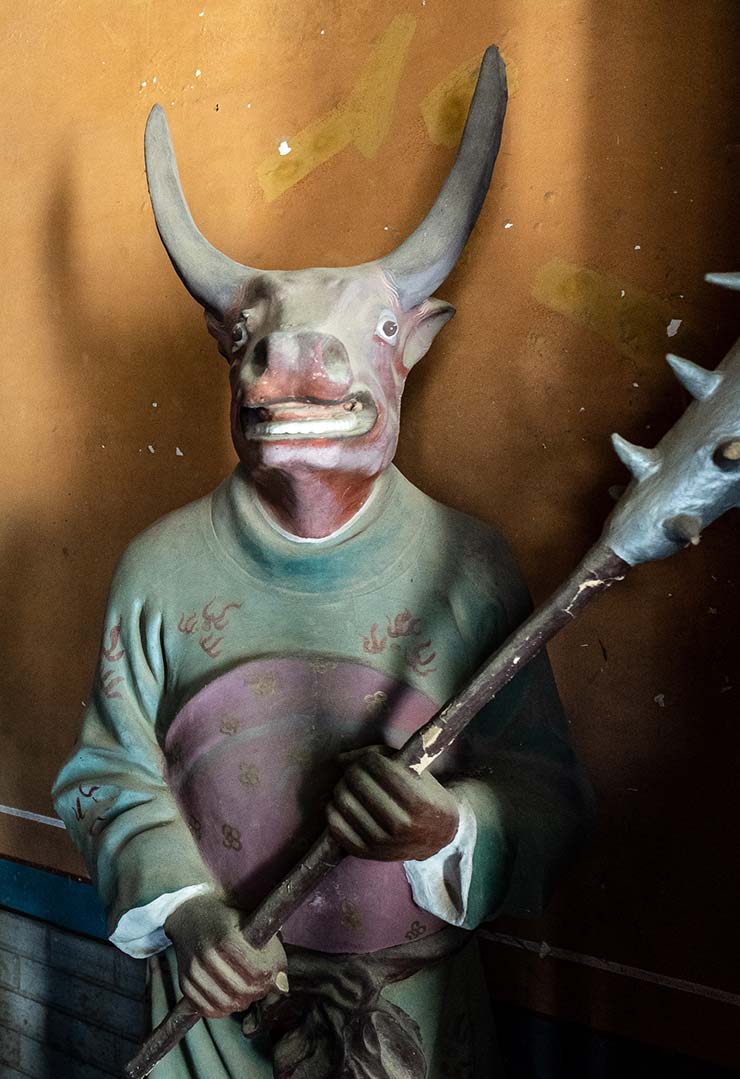 Department of the Hell
Depending on what you read, there are 15 Departments of Hell. The actual Department of Hell is much more restrained than some of the others.

Dōngyuè Temple was was completely gutted during the Cultural Revolution, with the contents burned or taken away to be destroyed. The temple reopened in late 1970s. All but five of the 50 statutes are replicas. The five older statues are originally from the Beijing Sanguanmiao (Three Officials Temple), which currently serves as government offices. They were moved to Dongyue Temple when the original statues couldn’t be found. The three courtyards and remaining buildings occupy only part of the original site. Dongyue Temple has hosted the Beijing Folk Customs Museum since 1997. The temple was restored in 2002.

Check out China’s memory manipulators, a 2016 article by Ian Johnson for the Guardian, for more background on Dongyue Temple, other cultural sites, and the recreation of Chinese history by the Communist Party. A fascinating read.

Information in the post about Dongyue Temple was referenced from Wikipedia and Travel China Guide.

END_OF_DOCUMENT_TOKEN_TO_BE_REPLACED 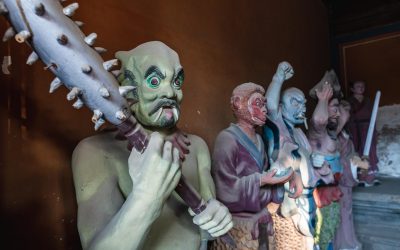